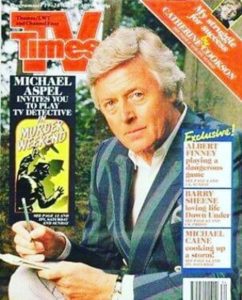 Joy Swift MBE invented the concept of interactive murder mysteries 40 years ago and inadvertently created a world wide industry that has been much imitated but never bettered! Joy has a history of finding new ways for people to enjoy her plots,  including – obviously – ‘Death on the Nile’ cruises.   She wrote her first TV murder plot in 1989 and published a book – complete with an interactive mystery. In 2007, a major newspaper ran a devious interactive murder game, over two weeks as a highly-successful competition for its readers.

Joy was  awarded the MBE in the 2001 New Year’s Honours list for her services to British tourism.

2015 – Joy Swift MBE was nominated for The Readers Choice Award in The Independent Travel Awards. Joy was not surprised to have missed out to the others on the list – Sir Michael Palin and Sir David Attenborough.

2013 – Joy was commissioned to work with Japanese Television’s NHK to produce an interactive Murder Mystery programme which was aired over three days of a weekend and due to its popularity has been aired a second time.

2010 – Joy wrote her first online plot for her guests, and Murder Mystery Investigations was born

2007 – Special ‘Death on the Nile’ cruises in Egypt. Joy published her first book ‘The Joy of Murder’.

2001 – In the New Year’s Honours List Joy received an MBE for Services to Tourism.

1989 – Joy worked with ITV producing a televised ‘Murder Weekend’ which was a three-night event watched by 7.5 m viewers!

1988 – Her company worked with P & O for three years where they hosted Murder Cruises.

1981 – Having come up with the idea when she was working for a chain of hotels in the North West of England, Joy presented the very first Murder Weekend in the world on the 31st October 1981 at The Prince of Wales Hotel Southport. The event was a huge success and both the national and international media were eager to cover the next event, which  hadn’t even crossed her mind! The New York Times, The Daily Mail, The Washington Post, CBS Television News and the BBC Holiday Programme all covered her second event.